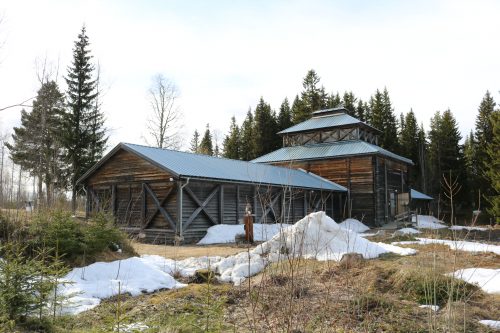 An genuine industrial experience from another century at Loos cobalt mine
The Loos cobalt is located in the middle of the village,  where you can look back upon the industrial spirit of the 18th century. The mine is surrounded by an idyllic wilderness, offering a great variation of bedrock and nature.

Several exhibitions, as well as a slideshow, can be viewed inside the mine. As you descend underground, you are led through the mine along wooden pathways and stairs, at the same time as you are taken back roughly 250 years in time, into the spirit of another century. The atmosphere will bring to mind the history of the mine, the people who worked there, and their everyday life, underground. 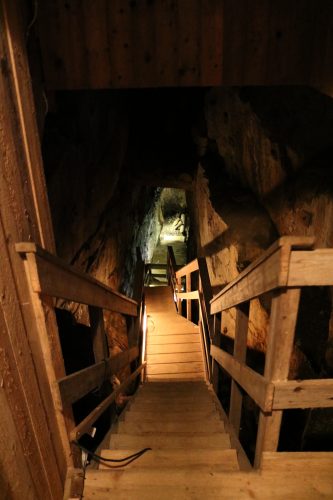 Some copper findings were observed as early as in the 17 th century in Los, but the amount in the samples was so small, that it was not considered worth mining.  Later, in 1733, assessor Henric Kalmeter acquired the mining rights for the mine in Los, because he suspected that the ore could contain both copper and bismuth.
As it turned out the ore indeed contained both copper and bismuth, but, more importantly, the newly discovered chemical element cobalt. Initially, the ore was exported unrefined, but the authorities found that it was a waste of time and money to have the ore refined abroad, as opposed to within Sweden, in order to extract the sought after cobalt blue pigment. Thus, Kalmeter was ordered by the crown to construct a works in Los where the ore could be refined on site, and the pigment processed. The construction was later given the name Sophiendal, and was most probably named after Kalmeters wife, Anna-Sophia.

Sophiendal was later repurposed into a glassworks. The glassworks was, however, rather short lived and had to cease production after only eight years, perhaps due to the costly and complicated transports from Loos to larger cities.
In 1751 the chemist Axel Fredrik Cronstedt discovered the ground element nickel, following examination of ore from Loos cobalt mine. However, due to a lack of new cobalt findings, the mine had to shut down in 1773, ending a 40 year long era. 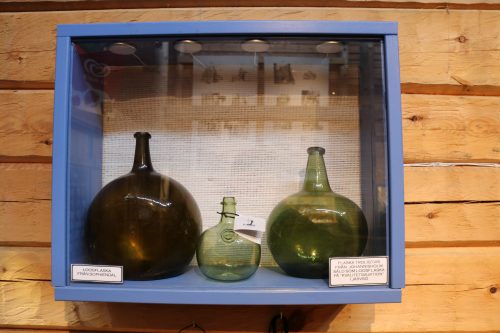 The glassworks produced, among other things, the “Loosflaska”, a round bottle with a green or cobalt blue tint, that came to be associated with the Sophiendal glasswork. The few  bottles that survived to this day have an estimated value of several thousand SEK when sold on auctions.

”Loosbrynet”
Loos also became known  for the Loos
whetstone. People have mined shale since the middle of the 19th century in the area around Ryggskog, located west of Los. Out of the shale, people made the famous Loos whetstone. It is still made in Los today, by father and son, Dick and Conny Persson, and can be found in the gift shop at the mine, as well as other places around
the country. 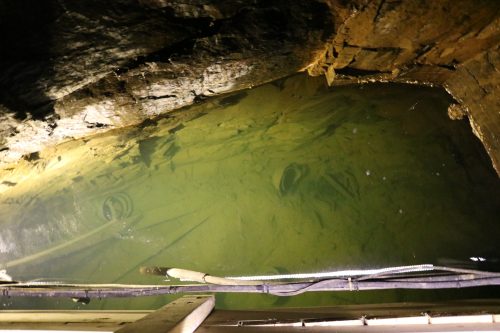 The mines were emptied of water in the 1820s and in 1923, but no ore worth mining was found during either time. In 1989, a group of local enthusiasts gathered in Los to explore the abandoned cobalt mines, which for generations had been used as a dangerous playground and dumpster by the locals. Many had wondered over the years what lay hidden under the dark surface of the water filled mines. The non-profit association
“Loosgrufvan” was founded in the autumn of 1989. The mine was then emptied of millions of liters of water, as well as hundreds of cubic meters of rock and trash. The largest shaft in the mine, more than 40 meters deep, was named ”Lovisa”. Altogether, more than 7000 hours of non-profit work were needed to transform the abandoned
mine into a tourist attraction. The mine was opened for public viewing on March 21, 1992.

Opening hours
For visits outside the opening hours, it is necessary to pre-book a tour.

This website uses cookies to improve your experience while you navigate through the website. Out of these, the cookies that are categorized as necessary are stored on your browser as they are essential for the working of basic functionalities of the website. We also use third-party cookies that help us analyze and understand how you use this website. These cookies will be stored in your browser only with your consent. You also have the option to opt-out of these cookies. But opting out of some of these cookies may affect your browsing experience.
Necessary Alltid aktiverad
Necessary cookies are absolutely essential for the website to function properly. This category only includes cookies that ensures basic functionalities and security features of the website. These cookies do not store any personal information.
Non-necessary
Any cookies that may not be particularly necessary for the website to function and is used specifically to collect user personal data via analytics, ads, other embedded contents are termed as non-necessary cookies. It is mandatory to procure user consent prior to running these cookies on your website.
SPARA OCH ACCEPTERA